Showing posts from 2015
Show All

2015 Good Overall with Some Parts Outstanding
2015 has been a busy year for Green Light.  In the past 12 months we have opened several new homes; many of which have been specially adapted to suit people’s needs, and come through an unprecedented period of inspections with eight homes coming under the Care Quality Commission  (CQC) spotlight in just 14 weeks.

All eight homes: Litttlecroft, Huthnance Park, Wheal Gerry, September Lodge, Fairfield House, Comprigney Vean, The Pines and Penrose Farm, achieved an overall rating of ‘Good’, with Littlecroft achieving an ‘Outstanding’ from the independent regulator for its responsive approach.  The inspections, which took place between August and November this year, highlighted the positive relationships and the open and warm culture that exists within the homes.

As an artist colours are clearly important to Robyn Steward. Her paintings are filled with vivid, vibrant yellows, greens and blues of all shades. She also uses colour to to help her tell people apart, including herself. Her trademark blue hat and blue boots allows her to recognise her own image in photographs; without these her face would be indistinguishable amongst the crowd. Robyn has prosopagnosia, a condition that means she is unable to recognise familiar as well as unfamiliar faces.
“It’s common amongst people with autism,” she declared during her public talk in the ballroom of the Penventon Hotel in Cornwall. Living as a young woman with Asperger’s syndrome she is known for her straight talking, no nonsense approach and the audience, largely made up of parents with children on the autistic spectrum, were keen to find out how she manages her life and what tips she can pass on to help them manage theirs.
Robyn, who has cerebral palsy that affects one side of her body, says painti…
Post a Comment
Read more

Green Light's senior staff staged a workshop for the Redruth Jobcentre Plus team to help them attract more people into the care sector. Green Light is one of the first care companies to join the teams with the Department for Work & Pensions in Cornwall during its 'Campaign in a Box' – a monthly campaign which recently focused on the care profession.
Green Light's Kerry Noonan and Debbie Smith took part in the DWP workshop where they explained the training, skills and experience necessary to become a support worker. Debbie, who has managed several Green Light homes, said it was a brilliant opportunity to dispel many myths around working within the industry, adding: “They were impressed with Green Light's proactive approach. We explained that all new team members undergo two weeks of paid training before they begin working in any Green Light home and that all DBS checks are paid for by the company. New staff are also given two weeks to shadowexisting staff within…
Post a Comment
Read more

There are said to be around 3 million people working night shifts in Britain. For many working through the night gives them more time in the day to enjoy their favourite pastimes or to spend time with their loved ones. Gavin Mountjoy is a self-confessed family man who says working nights, as a support worker in Cornwall, gives him treasured weekends to see his family. His shift patterns, working several nights consecutively, means he can have up to one week off at a time: “I love being with my kids and having quality time with them is something that I really look forward to.”

As the waking night team member at The Pines, which is home to three young men with autism and other complex needs, Gavin has developed a routine that helps him get through the twilight hours: “I get great support from the rest of the team who have helped me settle in well. I am on hand if anyone needs reassurance during the night.


"Bill may wake up and want to watch a film. He is an awesome guy and…
Post a Comment
Read more

Organising a break for someone with autism is not without its challenges. As well as overcoming anxieties, such as travelling by car, train or ferry, there’s also new environments and strangers to deal with. Green Light is showing that despite these hurdles holidays can lift people’s spirits, be a welcome break from daily routines and create exciting opportunities to reach out and try life affirming experiences.
John relaxing in his garden
John is a young man whose stature and confidence has grown year on year. With support from Green Light he has taken on rock climbing, kayaking, horse riding and swimming, achieving far more than was ever expected.  John, who is nonverbal, lives near Newquay’s picturesque beaches where his love of the great outdoors has been gently nurtured by his former key worker, Dominique Garcia-Jones. “I spent a long time getting to know John and devised an activity board so that we could communicate more effectively. When he first came to the home he was very in…
Post a Comment
Read more

This summer has seen many of the people that we support enjoy amazing experiences thanks to our staff going that extra mile to make their dreams come true.  We have seen Hugo travel by boat, train and car to France - fulfilling his ambition to tour several World War II sites, while Michael had a thrilling time at Alton Towers. Daniel is the latest young man to return from his own epic journey having travelled to Disneyland in Paris accompanied by his support workers, Tom Baines and Kelly Cumberbatch.
Dan having fun with the characters from Lion King.

Daniel flew from Exeter to Paris where he spent an action packed three days exploring the theme park. “When we arrived we were blown away by how big Disneyland is,” said Tom. “It’s a huge town with restaurants and themed rides dominated by a spectacular castle. It was breathtaking.”
The highlight of their trip was a dramatic light show and firework display and the numerous themed rides Daniel’s favourites being the Sword and the Stone, Dum…
Post a Comment
Read more 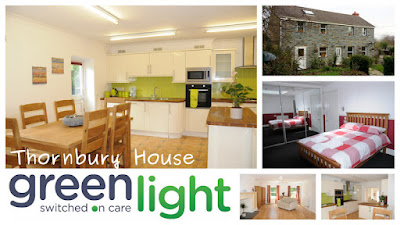 Appeal to Landlords, Developers & Home OwnersGreen Light provides high quality homes for people with autism and learning disabilities in Cornwall.  Due to demand for services we are appealing to landlords for further homes to rent.
Since opening its first home in 2011 Green Light has gone from strength to strength, creating family-sized homes, flats and apartments across Cornwall and jobs for over 200 people.
Green Light is currently looking for homes to rent in Cornwall. Properties are rented for a minimum of five years, or for as long as possible, to give tenants security and stability, a key need for people with autism.

Green Light's homes are fully maintained to a very high standard to ensure a warm and welcoming atmosphere. They are inspected regularly by the company, as well as the industry regulator,  the Care Quality Commission.
Sarah Miller, Green Light’s compliance manager, says:  "The homes we lease in the Newquay, Truro, Redruth, Camborne and Helston areas are …
Post a Comment
Read more
More posts